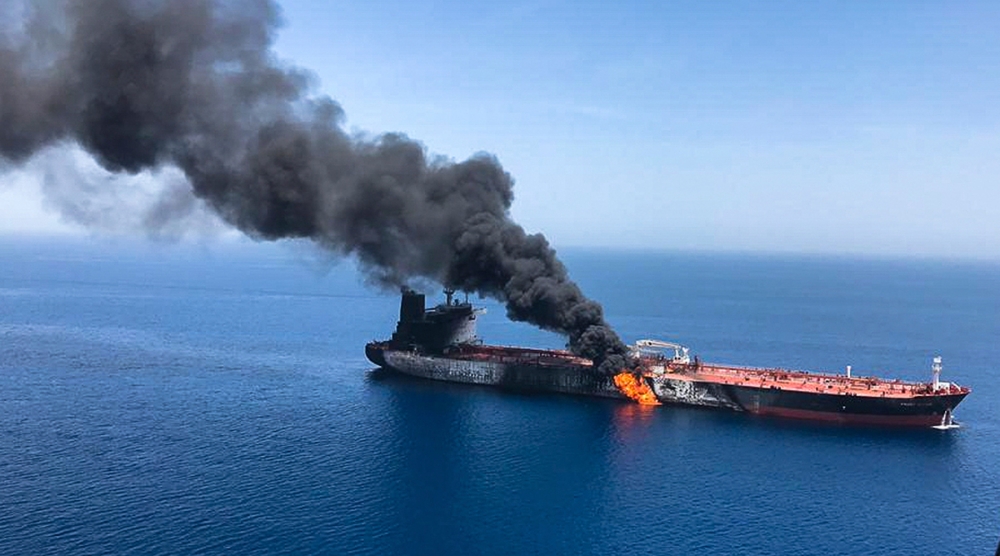 Suspected attacks on two commercial vessels near the Strait of Hormuz fueled expectations for higher shipping rates, driving up shares of companies that operate tankers.

Shares of Frontline Ltd., whose ship Front Altair was damaged by explosions early June 13, surged as much as 11% in Oslo, Norway, the most since February. Nordic American Tankers Ltd. climbed a similar amount, while DHT Holdings gained as much as 7.1%.

“The narrative is that a conflict in the region, and a possible closure of the Strait of Hormuz, would be good for tanker rates in the short term,” said Frode Morkedal, an analyst at Clarksons Platou Securities, based in Oslo. Longer term, the lost volumes from a closure would be a “killer to tankers,” he said.

Prices for crude oil soared in London and New York on concern the attacks in waters that carry Middle East crude exports would inflame tensions between the United States and Iran. The incidents follow damage to four oil tankers near the United Arab Emirates less than a month ago that was believed to have been caused by underwater explosive devices.

The United States blamed Iran for the attacks as the incidents stoked fears that high-stakes diplomatic efforts won’t avert a military confrontation between the U.S. and Iran.

U.S. officials have determined Iran was responsible, Secretary of State Michael Pompeo told reporters in Washington, noting that Iran had previously threatened to curtail oil transport in the Strait of Hormuz.

Iranian officials have denied involvement, with Foreign Minister Javad Zarif suggesting that Iran’s enemies may have been behind the attacks and reiterating calls for a regional dialogue.

The other ship damaged was the Kokuka Courageous, managed by BSM Ship Management of Hamburg, Germany, and operated by Kokuka Sangyo of Japan. Crews of both ships have been evacuated and are safe.

“This suspected attack is a deeply worrying and intolerable situation,” Guy Platten, secretary general of industry group International Chamber of Shipping said in a statement. “The shipping industry, and most importantly the crews, must not be exposed to such risks.”

The tensions may inflate the cost of insuring tankers shipping Middle East crude in the oil-exporting region, and so-called additional premium surcharges that owners pay when sailing to the Persian Gulf are likely to rise with immediate effect, insurer Hellenic War Risks Club said. Owners could refrain from accepting charters from the region while evaluating their risks.

While political motives would suggest attackers would seek to interrupt oil flows from the region, containerships also pass through one of the world’s most strategically important choke points, between the Persian Gulf and the Gulf of Oman. Hapag-Lloyd AG, the world’s fifth-largest container shipper, said one in 10 of its scheduled services passes the strait and that it would adapt sailings as needed.